Eight Arriva employees from the Thurmaston and Wigston depots successfully completed a Mental Health & Wellbeing qualification and are proudly showing of their certificates. Massive thank you to everyone involved for their hard work in achieving the qualification.  In particular, Mick Townsend, TDF trainer who did a cracking job in getting all the trainees through the qualifications.

Everyone at the Development Fund would like to send their sincere congratulations to all concerned. Dec 2019 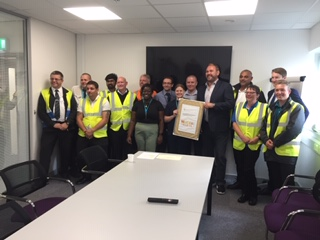 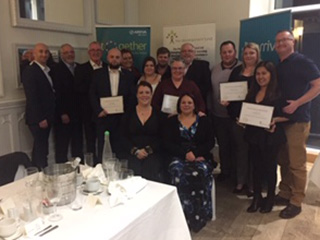 Five famous bus drivers from Arriva’s Southend depot have accomplished a magnificent landmark. They are the first drivers in Arriva to attain the brand-new standard in ‘Passenger Transport Bus, Coach & Tram – Level 2. And to celebrate their superb achievement and in recognition of their outstanding work a gala dinner was held at the Park Inn hotel in Southend-On-Sea.
In attendance were the five driver, Tracy O’Brien, John O’Brien, Lee Rutter, Nicole Jones and Richard Poet.
A special mention and congratulations must go to Rachel Day, the course trainer, who delivered an outstanding programme. The drivers couldn’t speak highly enough of Rachel, with comments like; “Rachel is an inspirational trainer constantly there to help and support us. Rachel always has a positive attitude to everything she does and has permanent smile on her face. Rachel worked incredibly hard to help us achieve our qualification”.
Also supporting the evenings celebrations were Mark Bowd – Regional Managing Director for Arriva Midlands, Jason Perkins – Regional Accountant for Arriva Midland, Gavin Hunter – Performance Improvement Director for the Southern Counties, Sam Chapman from Unite the Union, Mat Chapman – Managing Director of the Development Fund. 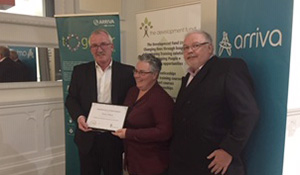 Tracy O’Brian: Tracy started with Arriva in March of 2018 where she completed the driver training and passed her test. Since then Tracy has gone on to become one of our mentors at the Southend depot passing on her knowledge to others. Her trainees are always very positive about the training they receive from Tracy.
Tracy is pictured receiving her certificate from Mark Bowd (Regional Managing Director-Arriva Midlands). 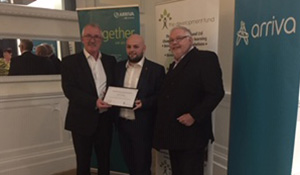 John joined Arriva in 2018 and his career is developing. He has on to become Southend Risk Champion, assessing risk on all routes within the area which is a big responsibility. 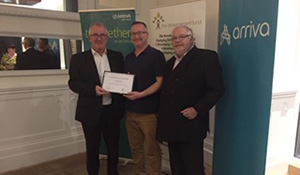 Lee Rutter: Having spent 15 years as a mental health nurse and support worker Lee decided to join Arriva in March 2018. Lee is a family man who values his family time. Despite being busy at home and work he completed his qualification on time. Lee is very pleased to have completed the new qualification and will wear his lapel badge with pride. Lee is pictured receiving his certificate from Mark Bowd (Regional Managing Director-Arriva Midlands) and Sam Chapman (Unite the Union). 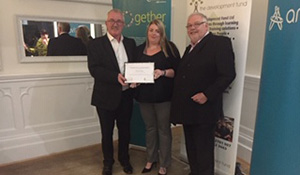 Nicole Jones: Nicole started the course in March 2018 but unfortunately struggled with her health throughout her time on the course. There were a few times when Nicole had to play catch up and did so without complaint and to a high standard. Nicola did really well considering she is a mother of two children and works full-time. Nicole is very proud of her achievements and we are extremely proud of her too. Nicole is pictured receiving her certificate from Mark Bowd (Regional Managing Director-Arriva Midlands) and Sam Chapman (Unite the Union). 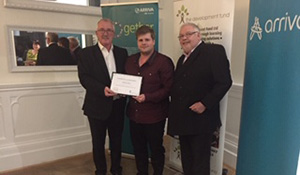 Richard Poet: Richard was the only one of the famous five with any driving experience and quickly became a great help to the others particularly in the beginning of the course. Richard course colleagues speak very highly of him and say he’s a great guy to work with, always upbeat and positive. He is proud of gaining his qualification but particularly delighted about improving his level in maths. Richard is receiving his certificate from Mark Bowd (Regional Managing Director-Arriva Midlands) and Sam Chapman (Unite the Union). Nov 2019

Scott Quinnell (born 20 August 1972) is a Welsh former rugby union and rugby league footballer who played in the 1990s and 2000s. He was a number 8 for Wales, Llanelli, Llanelli Scarlets, Richmond and the British and Irish Lions in rugby union. He won 52 caps for Wales (seven as captain) and three for the Lions, and scored 11 international tries for Wales and one for the Lions. Scott’s has been the Development Fund’s education ambassador for a number of years and recently visited the Arriva bus depot in Thurmaston (Leicester) to present the Mental Health and Wellbeing certificates to seven Arriva employees.
According to the World Health Organization, mental wellness is defined as “a state of well-being in which the individual realizes his or her own abilities, can cope with the normal stresses of life, can work productively and fruitfully, and is able to make a contribution to his or her community.”
Arriva and the Development Fund take Mental Health & Wellbeing very seriously and 12 month’s ago launch a Wellbeing campaign across the company. During that time over 1000 employees have completed the Wellbeing course. Sept 2019 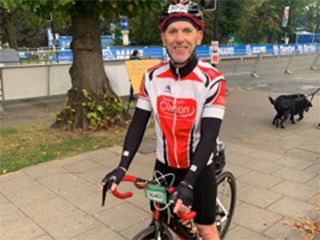 Steve moves up a gear

When he’s not working or spending time with his busy family, The Development Fund’s Commercial Director, Steve Holton can be found taking part in all forms of cycling. Last weekend (22nd September) he competed in the 2019 Road World Championships official sportive. The event started and finished in Harrogate and Steve completed the hilly 100 kilometre course in 3 hours, 43 minutes.’
Sept 2019 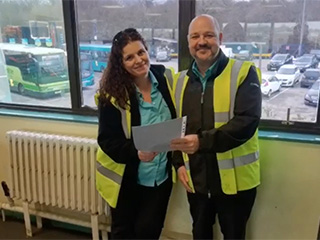 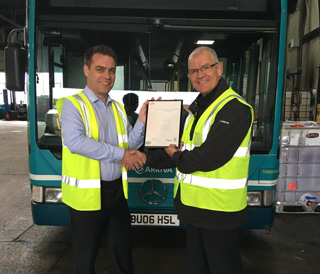 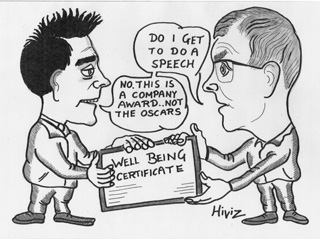 Matt Bennett (Instructor left) is pictured with Paul Gosling who is a full-time driver at the Harlow depot. Paul recently completed his Wellbeing qualification at the depot, this consists of a three-month workbook and study on the subjects of Personal safety awareness, Awareness of mental health, Introduction to stress and stress management, Dementia awareness and Introduction to Alcohol awareness for the individual.

Paul also created the illustration shown as he used to be a cartoonist for a newspaper before joining Arriva. He is popular amongst staff as he regularly creates cartoons/illustrations based on a noticeable characteristic of that person.
Sept 2019 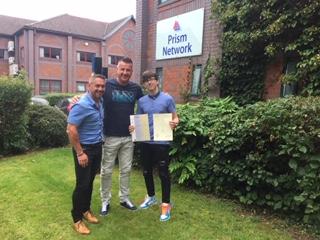 We have courses starting at:

For further information or to register for one of the selection events please contact us via our contact form.